Blood and Black Lace (Italian: Sei donne per l'assassino; also known as Six Women for the Murderer) is a 1964 Italian thriller film directed by Mario Bava. Bava co-wrote the screenplay with Giuseppe Barilla and Marcello Fondato. The film stars Cameron Mitchell and Eva Bartok. The story concerns the stalking and brutal murders of various scantily-clad fashion models, committed by a masked killer in a desperate attempt to obtain a scandal-revealing diary.

The film is generally considered one of the earliest and most influential of all giallo films, and served as a stylistic template for the "body count" slasher films of the 1980s. Tim Lucas has noted that the film has "gone on to inspire legions of contemporary filmmakers, from Dario Argento to Martin Scorsese to Quentin Tarantino." In 2004, one of its sequences was voted No. 85 in "The 100 Scariest Movie Moments" by the Bravo TV network. -Wikipedia 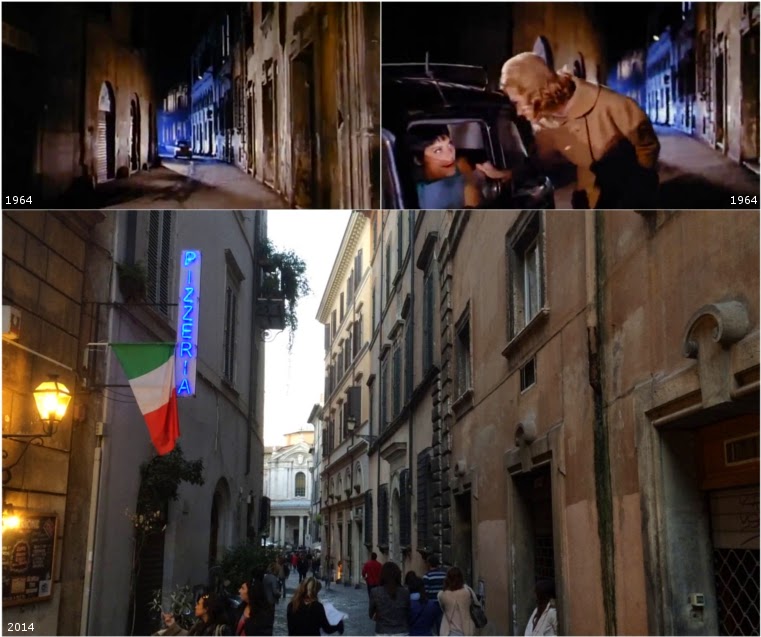 Peggy (Mary Arden) arrives home. Down the street you can see the church of Santa Maria della Pace.

Posted by Jarno Mahlberg at 4:34 AM